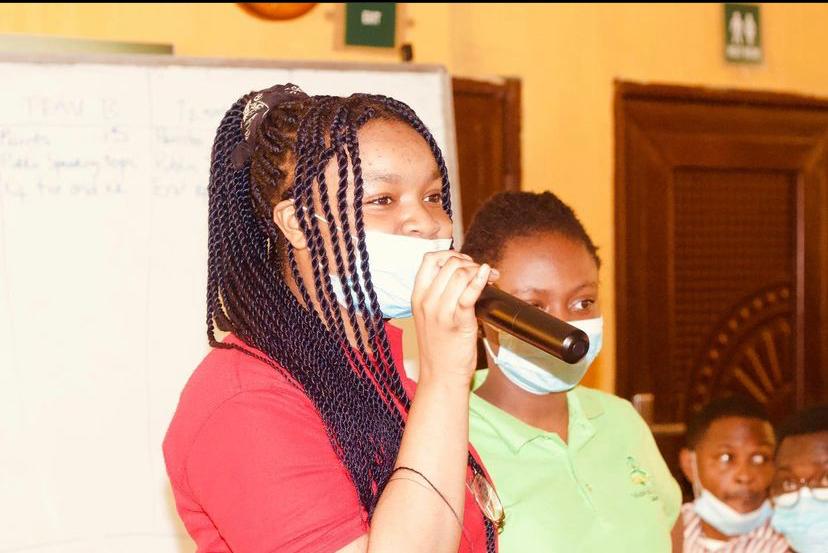 The literary week is a week-long program that aims at fostering the love for literature and Africanism amongst the students of Westerfield College.

This is the college’s way of celebrating brilliant minds and outstanding students in various competitions that cut through extra-curricular activities.

This week is one of the most interesting moments in Westerfield College, so much so that the kids look forward to it from the beginning of the semester.

For this year’s event, students were broken into teams and they rehearsed accordingly.

How The Week Went

Finally, the wait was over, rehearsals stopped. The entire vicinity was sparkling with different ranges of smiles. For a moment I had to remind myself that it was the first day of the long-anticipated literary week.

This electrifying aura was what pushed the Experience Team to call for a meeting with the kids on how the week will run from the next day; Tuesday, through Friday.

Some faces that still had a bit of confusion written over them prior to the meeting later wore beaming smiles, stemming from the clarity they got on the plan for the week.

The debaters and public speakers sharpened their confidence.

Students from different ethnic groups started calling home to get recipes for their local Nigerian dishes.

On Tuesday morning, the students couldn’t wait for the scheduled time for the first round of the competition.

The feeling for them was like that of a little dog turned loose for the first time outside the yard. It was the most exhilarating thing to see!

While public-speaking representatives from each team were seen pacing around the school compound in preparation for their speeches,(Five tentative topics for the public speaking competition were sent to their WhatsApp group chat in the dead of the night), delegates who were to represent their teams in the World History Bowl and National Geographical Bee competition, kept calm, engaging their minds and conjuring their residual knowledge on things they already knew, as they didn’t know what to expect.

At exactly 2:00 pm, the competition kicked off with the National Geographical Bee. The major rule of the game was for each player to pick a number from 1 to 30 for a quiz question to be read aloud to them. Whoever failed was knocked out immediately.

We then proceeded to the World History Bowl where the 8 remaining players picked tiny folded papers from a bowl; In each of these papers lie questions about the globe.

In the end, Victor emerged as the winner with the highest points!

It didn’t end there as we immediately moved to the public speaking competition.

One member from the duo representing each team had to step out to ballot what topics they were to speak on.

10 minutes were allotted to the teams to prepare for the topics they picked. This indeed wasn’t a simple nut to crack but some students still found their way around to win the competition.

The winners (Ayomary and Stephnie) found a way to creatively apply a story to their topic.

By the end of Tuesday, the students realized that they were in for a lot more academic jingoism, owing to the kind of activities they had had.

It’s just like the process in a three-course meal. By Wednesday, their appetites were already wet to take in more.

Two things fascinated the students as they got to the College on Wednesday morning.

The audience and onlookers were in a hurry to unravel what the new debating style was going to look like while the debaters were trying so much to envisage how they will stamp their oratory prowess and dominance alongside thrilling the crowd.

Even though the students had been trained, they were still puzzled by the modalities of the debate. For the organizers and judges, it was a thing of joy creating history by hosting the first-ever British Parliamentary Debate Style at Westerfield College.

There was a moment of silence as debaters, the audience, and judges from both rooms converged at the auditorium for the results. Our amiable judges announced the results that saw the elimination of 8 debaters.

Thursday greeted us with mixed feelings!

The atmosphere was gloomy. One of the debaters who prepared so much was unhappy at the fact that he wasn’t going to feature at the finals on Thursday.

The same was the case of other debaters who had the same fate; they wore long faces because of their exit but the competition had to move on.

Finalists now knew their way around the debate. They were exponentially engraved in the style, delivery, and rules of the debate.

Without further ado, we went straight into a final that promised to be engaging and fiery. The topic was centered around women in underdeveloped countries getting free tuition for their tertiary education.

Debaters had only 20 minutes to prepare for this topic.

You could literally see fire on their heads in the library and other rooms they assembled in.

Each team agreed on some points and totally had divergent opinions on some other discarded points.

It wasn’t long enough that 20 minutes elapsed and it was time for the big event. Call it the clash of the titans!

It was breathtaking and intense as our debaters introduced us to new thoughts on the subject matter. The competition lasted for over 2 hours.

The heated debate suddenly came to an end. We had a suspense-filled break as we waited for the results.

We had a fun-filled break with the poets reciting their beautiful renditions. This went on for some minutes and the audience soon forgot about the debate results.

When it was time for the results to be announced, we saw heads bowed, shoulders down, and teary eyes.

As the judges gave their comments and reservations on each speaker, we saw some faces light up with smiles while some debaters had their hands on their heads in regret for missing some vital points that would have given them an edge over their counterparts.

After the analysis had been given, it was time for the results to be announced. You could see fists clenching in anticipation. Teammates holding their hands. Some hugged themselves fiercely. Drums rolled and you could almost hear the hearts of the contestants pounding and racing.

The judges played with our emotions by announcing the results in ascending order. When the best team was finally announced, the shouts shook the foundations of the six-storey college building. I have never seen the students that happy before!

The grand finale was on Friday and it was colorful! This was a day set aside to celebrate our Nigerian heritage.

Students were adorned in their native attires.

Earlier that day, they had made native delicacies from their regions. As part of the events of the evening, they exhibited the foods and had representatives who explained how each meal was made from start to finish. They explained the recipes and the nutritional values as well.

However, before they presented their meals, they had to dance to their native tunes. It was so beautiful how we went on a journey to different parts of the country merely watching them do their thing. There was a lot of food and drinks to go around.

We didn’t want it to stop but as the saying goes, whatever has a beginning has an end.

The festival and celebration of our rich Nigerian culture brought us to a beautiful end of the literary week.